Cancer is a transformation of our own normal cells to the bad ones. On exposure to risk factors both internal and external this metamorphosis occurs and the duration of time taken for each cancer is different. Only at a few times does cancer come out of blue, at all other times it gives tell tale symptoms & signs. Regular screening for cancer helps cancers to be detected early and some cancers like that of the uterine cervix and oral cancer can be picked up at the precancer stage and the transformation to cancer can be prevented.

Though these are the facts, the Indian population generally is not keen to get screened and second, they harbour a notion screening done once is adequate. These facts have made the journey in this aspect very tough for us at the trust. At times we have to coax them or lure them with a gift to get people to come for detection camps. Some people show up for these camps merely to show solidarity to the organization that promotes this camp. A substantial number does not even bother to collect the results of the tests done during the detection camp.

In the last decade we have seen that an awareness program precedes a detection camp and this has increased the attendance and also the willingness to get screened. The Mumbai chapter has had certainly a better response compared to others and over the years the camps here have increased quite significantly. Secondly organizations are keen to hold these camps as a goodwill gesture and this has also stepped up the numbers. Timely support from organizations like Association for India’s development has eased our push to the detection programs.

These screenings for cancer have value only if done regularly and little value if done only once. But what we believe is that the attendance at the first camp will remove the fear associated and people will be emboldened and motivated to get themselves checked annually. Hope attitude will change with times and getting screened for cancer will become an act by choice.

The first camp was held at Suriyur near Trichy on 23rd Oct 1994. This camp screened 82 women, 2 of them had frank cancer of uterine cervix and 8 of them had premalignant conditions. This was shocking!

This camp showed us in real the state of rural India with respect to cancer and urged us to do more in villages. For the next 3 years screening camps was on top of our minds and we had detection camps in several villages around Coimbatore Of these the one at Melkaraipatti , near Palani, drew the largest number , 400 persons were screened on a single day. 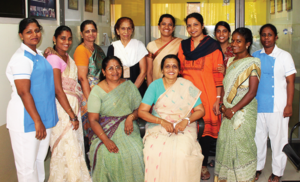 The First camp at Anamalai , near Pollachi , had very good response both in terms of numbers & interest. It seemed possible that Camps could be held here on a regular basis. Association for India’s Development consented to support the camps and we took up 3 villages with this support and planned to conduct detection camps every 3 months for the next 3 years. The first camps like the one in Anamalai, generated a good response, second a mild response & by the 3rd camp the villages lost interest. Secondly patients with frank cancers refused treatment even if we offered it free !

Over the years we have reduced camps to bare minimum and in Chennai they are held only on anniversaries. Last 2 yearsthis activity has to come to halt due to the corona pandemic

Aayiram in Tamil means a thousand and we envisaged to sponsor Mammograms in 1000 women from October 2012 to September 2013. Women had to attend a session on Breast cancer awareness and learn breast self exam. After that women above 40 yrs were offered a free Mammogram. Campaign was then taken up on a war footing amd nearly 40,000 women were contacted but the turnout remained poor. In one year’s time 713 women were offered free mammograms of which it is sad that only 563 actually underwent mammography.

The second 1000 mammogram was launched with the Support of Sri Matha trust in October 2017 .In one year’s time we managed to coax only 283 women to get this test done. At the Madras high court 500 women were educated and 99 of them wished to avail this facility .

In the subsequent years there has been a steady rise and we have started offering concessional mammograms throughout the year. Even then this screening procedure is poorly patronized and women come only after they find a lump, that too if it is big !

In April 2000 the first pap smear camp was done at Kalina where 47 women were screened. Then on, camps were held regularly, groups invited us for the awareness & detection camp for women, so also in association with other groups & NGO’s we did many more camps. From 2012 camps were held at our centre & 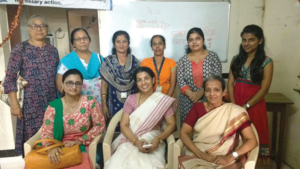 outside camps too increased considerably.

The women cancer clinic was started on 25th Sept 2013 at our centre and was held once a week on every Wednesdays. Our health workers used to campaign in the nearby predominantly residential areas and many women turned up for the pap smear tests. With Association for India’s Development (AID) extending their support for this project we could screen 1000 women in 9 months. On an average 12-15 women visited the centre every week for the pap smear test. Since they were all advised to repeat this for at least 3 consecutive years, many women visited the centre every year.

On 15th June 2019 when we shifted to our new bigger centre at Kailas Industrial complex, Vikhroli west, we decided to have these well women clinics thrice a week. There were many corporate, their back offices and companies where many women are employed. Our health workers and volunteers reached out to them distributed pamphlets and in a span of eight months since the inauguration 1000 plus women were screened at our centre and were also given the women specific cancer talks by our volunteers prior to the screening.

It has definitely been a challenge to get the women out of their houses for getting a check up done especially Cancer. Our health workers untiringly visit these places again and again and convince the women to get these tests done, which is a necessity. Our tag line has been Pap Paap nahin, vardan hai (Pap meaning Pap smear, is not a curse but a blessing)

12588 women have been screened till date. 100 plus colposcopies were done. With the sponsorship from AID, the trust too acquired one close to 50 colposcopies has been done at the centre. Dr. Geethanjali Amin spearheaded this project. Drs. Reena Upadhyay, Padmaja Gopishetty,Swati, and many many more gynaecologists gave honorary service and helped us to conduct these caps at the centre & outside.  Volunteers, nurses, and health workers facilitated the smooth functioning of these camps.  The pap smear proposals are put up for funding to Corporate under their CSR activity. STCI Finance Limited, HDFC Ltd, Association for India Development (AID) etc., supported us in this initiative.

These camps made beginning with World No tobacco day, 31st May 2014. The proximity to BEST bus depot to our centre got the conductors & drivers to the camp and slowly men in the neighborhood too trickled in. Doctors, interns and final year students visit the centre on alternate Sundays and on rest of the days dental surgeons practicing nearby pitch in help.

60 camps have been held so far screening 1137 persons. 5 men were found to have frank cancers & they were referred to TATA Memorial hospital or to their hospital of choice. 108 men were found to have premalignant conditions and they have been advised to quit smoking and take treatment. 11 men had severe narrowing of the mouth due to Sub mucous fibrosis, they too have been advised similarly .Of these men 3 come to the centre for exercises to increase the size of mouth opening.

With the opening of the new centre in Kailas Industrial complex, Vikhroli west 2 more detection camps were done. Men from the nearby areas were screened by the Dental Surgeons.

160 construction site workers were given the oral cancer awareness talk for Shree  Naman Group’s Premier site at Andheri. W.ith the help of posters they were taught the 4 finger test and nine steps of checking. Many were motivated and we hope they stay motivated to quit this habit. 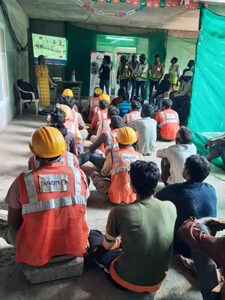 65 construction workers of Kohinoor Group-Majestic site at Kalyan were addressed on ill effects of tobacco and later screened by the Dental Surgeons. They took keen interest in the presentation and asked many questions one to one with the speaker.

The power point presentation stressing on signs & symptoms of oral cancer, causes and benefits of quitting were explained to the enthusiastic construction workers who gave a patient ear and also asked many doubts before they were screened by the Dental Surgeons.

For 75 workers working at the site for Puranik Builders City Reserva site at Thane were given the oral cancer awareness talk and were then screened and advised by the Dental Surgeons.

Another awareness talk for the Puranik Builders Ruma Bali site, Thane was conducted for 120 construction workers. The much needed talk on the ill effects of tobacco was shown with our presentation insisting on the signs & symptoms and measures to quit. This motivated 8 workers who came forward and took the pledge to quit. We hope they remain quitted.

Kalpataru Group’s Avana site, Parel witnessed a huge participation of 200 construction workers & 25 of the staff who saw the presentation was in for a rude shock that just a few years of chewing tobacco could be hazardous. 6 labourers were very keen to quit and asked us to counsel and help them. A chord struck!

For Terraform Realty Group’s Dwarka site at Ghatkopar oral cancer awareness & screening camp was organized. 100 construction workers participated in this program. Like in all our talks, when we ask the workers after seeing the presentation anyone have felt that they want to quit then we see to it that they are advised and also given the contact address for further follow up. 5 of the workers were keen to quit their habit.

A new batch of 125 construction workers of Kalpataru’s Magnus site, Bandra were advised on ill effects of tobacco be it chewing or smoking. Also the preventive measures and the 4 finger test and nine steps to check were explained to them.

An eloquent presentation of oral cancer was given to the 125 plus construction workers of Kalpataru group’s Radiance site at Goregaon. They were then screened by the Dental Surgeons and advised.

For the enthusiastic workers who had gathered at the Balkum site, Thane of Dosti group the cancer awareness and screening camp was a real eye opener. They not only listened attentively and cleared their doubts with the speaker but patiently waited to get themselves screened by our Dental Surgeons.

75 construction workers were given the oral cancer awareness talk at Kalpataru, Santacruz site. The session was interactive and many questions were asked.

The well received oral cancer awareness & screening camp at the sites was this time conducted for Tata Realty Group’s SEREIN site at Thane. 150 attentive workers participated in this program and later got themselves screened by the Dental Surgeons.

Oral screening camp was held for the construction workers of Skyline constructions at Nahur. About 50 of them were given the talk before they were screened by the Dental Surgeons.

Kalpataru-Avana site at Parel witnessed an enthusiastic participation of construction workers at the stilt parking area. They attentively saw the presentation and were in awe when the nine steps of checking were explained and eagerly tried to put their four fingers in the mouth to check them.

Another talk for the same group of Kalpataru was held at their Magnus site, Bandra on 19th Oct for 90 construction workers was a very interactive session. Many of them were young and wanted to quit this habit. 3 out of them had the courage to come up front and pledge that they have quit from this very moment.  We have extended our support and asked them to contact us at our centre.